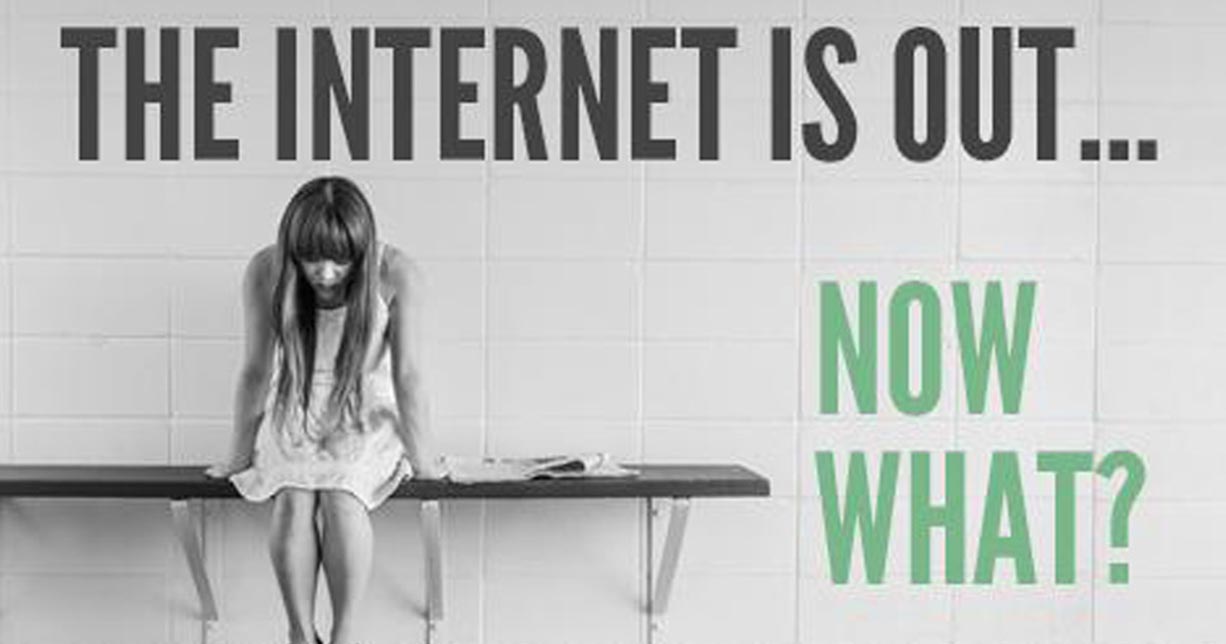 What happens when the Internet goes down? The biggest fear when considering virtual desktops

I have recently engaged in a blog discussion with a gentleman which began over the question of Internet connection.  Since a virtual desktop  relies on an Internet connection, this is not the first time this concern has been raised. And where there’s a question, there’s a blog post, so let’s get to it!

First of all, the statement that a virtual desktop “relies” on the Internet needs clarifying.  It is true that most people will be running their virtual desktop on an “full-blown” Internet connection most of the time.  However, a virtual desktop also runs with a 3G connection, just not as super quick.  Two weeks ago I found myself stuck waiting for AA recovery and managed to finish an article in time for a deadline on my virtual desktop using a 3G connection and my iPhone.  It was so satisfying to use “dead time” in that way.  Several police forces run on virtual desktops   – when updating reports on the job they often have to use a 3G connection because that’s all there is.  Other mobilized task forces (AA recovery being one of them) work on systems “reliant” on the Internet and use 3G when there is no other option.  Good news is that in most urban areas there is 3G and with the arrival of 4G it is only going to be better and more widespread, so happy days for mobilised workforce all round.  So much for 3G.

OK so we’ve had the Internet in our office for donkey’s years.  So I’m loving email and Internet and am highly dependent.  Wouldn’t you say we all are?  Whether we have a virtual desktop or not.  I’d go as far as to say, that if the Internet “goes down” we are all stuck.   Communication with the outside world breaks down as does communication within the organization. Web-based programs like Internet banking, or web-based accounting software cannot be accessed or updated.  Admittedly it’s highly rare that the Internet goes down (more on that later), but if it does, time will be lost and you’ll get behind.

Earlier this year, a few months after we’d moved onto virtual desktops, the thing that I have said “rarely rarely happens”,  happened.  This instance when the internet went down was a kind of “municipal state emergency” in that a whole part of our town was without internet, including part of the High Street with major chain stores interestingly being affected too.  For them it was hugely inconvenient not being able to sell (literally).

It was Murphy’s Law.  404, you smug people, you just got virtual desktops, well take this!   I have been in these same premises since 1997 and most of those with the Internet and we’d never experienced this.   So what did we do?  Well, we just went home (or to Costa, or to the beach, yes!) and carried on.

We stayed in touch over the phone and via email.  It was actually a revelation.  We began to ask ourselves did we actually need an office at all?

Personal experience of server going down

Now let’s talk about the sever going down.  As I said before, we’ve been working out of these offices for around fifteen years and boy oh boy! can I remember times when I just wanted to sledgehammer the server.  The amount of times it crashed.  One occasion, back in 2005, it seemed to go on for days. I can tell you that piece of metal doesn’t know how near it was to a jolly good thrashing.   There  were about ten of us at the time and we had to send nearly everyone home day after day. Productivity zero.  Not to mention the subsequent bill and the loss of data.   Nightmare.

Minimizing the risk of Internet disaster

Well, for those of you for whom Internet is absolutely business critical (all of us?) you should really be looking at this in any case, with or without a virtual desktop.  In fact, I’d go as far as to say , if you haven’t virtual desktops, it’s even moreimportant, since with a virtual desktop you can go to an Internet point and carry on working just as if you were in the office.  With a traditional set up, you either stay at the office and work without the internet, emails and  web-based applications e.g (internet banking) or go to an Internet point (home, maybe?) and work on company files offline (opening the risk to version control issues when you return to the office and synchronise).

There are various ways you can go about minimizing risk.  At the very top end there is a BT product that guarantees 100% uptime.  It comes at a price.  But if you’re a high street store and you’ve lost an afternoon of sales, that comes at a price too.   Another way we recommend to clients is to have two (or more) broadband lines bound together, so that if one “goes down”‘ then the traffic just gets lifted over to the other one without anyone even noticing it.

In terms of the virtual desktop, what we would recommend to our clients would depend on many factors such as budget,  consequences of total  Internet failure,  the necessity for them all to be physically present, company culture etc.  That’s where our system profiling comes in.  We don’t believe virtual desktops are the answer for every business, or for every department in the business.  A lot needs to be weighed up before we would direct our customers towards any particular solution.

Want to talk about any of this, just fill out the box below and we’ll get straight back to you.